Following the successful launch of the £33 million (US$50 miilion) Graff Hallucination Watch, coated with 110 carats of rare colored diamonds at BaselWorld-2014, that created a sensation at the show, Graff Diamonds has once again succeeded in stealing the show at BaselWorld-2015, this time launching the “world’s most valuable transformable timepiece” that can also be worn as a ring or bracelet, priced at a whopping £27 million or US$40 million. 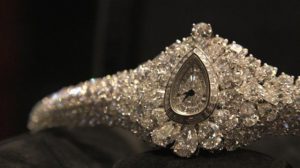 The dazzling timepiece, aptly christened “The Fascination,” was unveiled in an atmosphere filled with excitement and anticipation at BaselWorld, the watch industry’s biggest annual trade show, that began in Basel, Switzerland, on March 19, 2015. The transformable jewel, undoubtedly a true work of art, incorporates 152.96 carats of the finest white diamonds, with a detachable 38.13-carat, D-color, Flawless, pear-shaped diamond, cut and polished by Graff’s master cutters, as its centerpiece. The magnificent detachable diamond can be worn as the centrepiece of a highly sculptural bracelet or placed into a tailor-made shank and worn as a ring. 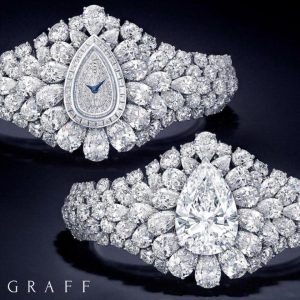 Graff Diamonds Fascination Watch and the bracelet formed by its transformation

Graff Diamonds, a leader in the international luxury jewelry industry, dealing in high-end diamond jewelry was founded by Laurence Graff in 1960, after humble beginnings as a jewelry apprentice crafting his own jewelry and peddling his products from shop to shop in London’s East End. In 1967 Graff expanded his business into Asia, opening up a jewelry concession in Singapore. Graff’s company eventually became the largest jewelry manufacturing company in Great Britain and in 1972 Graff decided to go public on the stock market, and embarked on the retail business. One of his first retail stores was set up in London near Harrods Departmental Store, and was a great success. The store was patronized by affluent customers from the middle east which included customers from several Arab Royal families. The climax of his career came in 1973, when Graff became the first jeweler in Great Britain to receive the Queen’s award for enterprise in international trade. Graff also became the first jeweler to have received the same award on multiple occasions from the Queen, when in October 2006, he received the award for the fourth time. Graff Diamonds is involved in all stages of the diamond industry, beginning with mining, followed by cutting and polishing, manufacturing of exquisite fine jewelry and finally marketing of the products through a network of outlets in leading cities acoss the world. Today Graff Diamonds has outlets in New York, London, Moscow, Geneva, Monte Carlo, Dubai, South Africa, China and Japan. 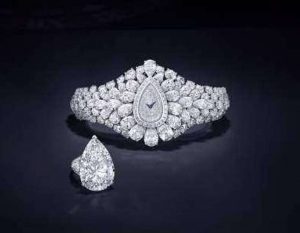 Graff Diamonds Fascination Watch and the Ring formed by its transformation

In the year 2013, Laurence Graff was awarded an OBE by Her Majesty Queen Elizabeth II for his services to the jewelry industry.