De Beers Group of Companies in a press release dated March 2, 2017, has announced the official commencement of production on this date, at their Gahcho Kué Mine, a joint venture between De Beers Canada (51%) and Mountain Province Diamonds (49%), the world’s largest new diamond mine to have opened during the course of last 13 years.

Gahcho Kué Diamnd Mine, situated 280km northeast of Yellowknife in the Northwest Territories (NWT) of Canada

The joint project completed ahead of schedule and within the estimated budget, reflecting the excellent support and co-operation received from all stakeholders in the project, is anticipated to yield a total output of approximately 54 million carats of rough diamonds, during the period of its lifespan, projected to be around 12 years, mining an average of 3 million tonnes of kimberlite annually with an average grade of 1.57 carats per tonne, producing an average of 4.45 million carats of diamonds annually. The Capital cost of the project was estimated to be between $600 million-$650 million. 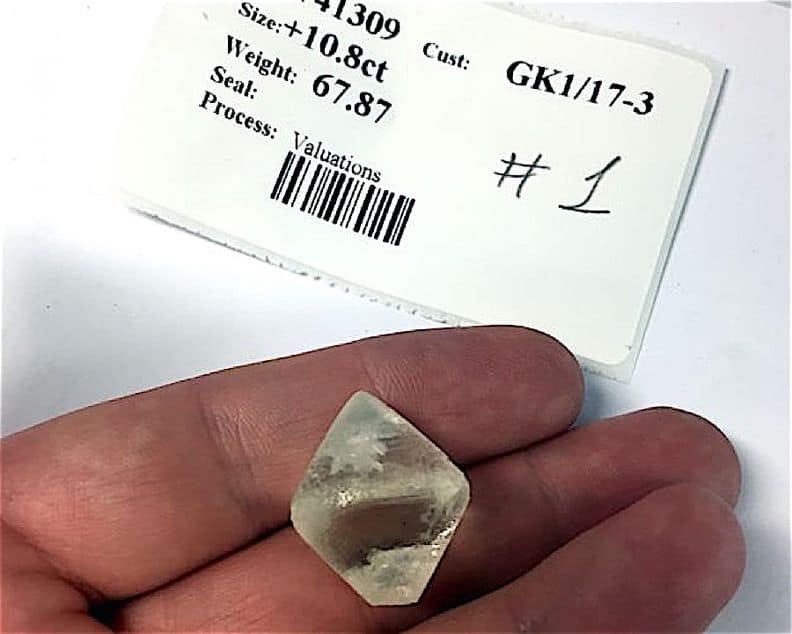 67.87-carat gem-quality octahedron diamond recovered at Gahcho Kué Mine in February 2017, during production ramp up

The ramp up in production at the mine began on August 1, 2016 and the official inauguration of the mine was held on September 20, 2016, attended by 200 distinguished guests from across Canada and around the world.

Issuing a statement in view of this significant event in the history of the company, the CEO of De Beers Group, Bruce Cleaver, said, “Today marks a significant landmark for De Beers in Canada as Gahcho Kué becomes an important contributor to the Group’s global production. That the mine has reached this landmark, on budget and ahead of schedule, is testament to the partnerships that have worked together since construction began. It’s a result of these partnerships that the mine is set to deliver socio-economic benefits of more than C$5 billion to the economy of the Northwest Territories over its lifetime.”

The CEO of De Beers Canada, Kim Truter, issuing another statement, said, “With Gahcho Kué achieving commercial production, it successfully builds on the transformation of De Beers in Canada. General Manager Allan Rodel and his entire team are to be congratulated for completing this milestone safely and ahead of schedule during the extreme winter conditions that have taken place over the past few months.”

Elaborating further on the support and co-operation shown by all stakeholders in the project, President and CEO of Mountain Province Diamonds, Patrick Evans, said, “The dedicated support of our shareholders, business partners and employees has made today’s important achievement possible. Gahcho Kué is a rich diamond deposit that secures Canada’s position as one of the world’s leading diamond producers. Our thanks and appreciation goes to our operating partner, De Beers Canada, for delivering the Gahcho Kué mine safely and ahead of schedule.” 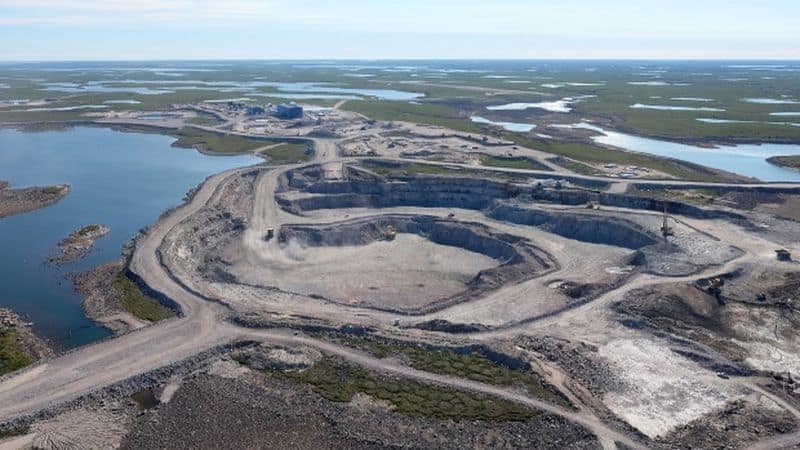 One of three open pit mines at Gahcho Kué Mine

The extremely cold and remote fly-in/fly-out Gacho Kue mine, situated approximately 280km northeast of Yellowknife in the Northwest Territories (NWT) of Canada, comprising of three open pits, employs 530 people full-time, most of whom are working a two-week in/two-week out rotation.

According to a Socio-Economic Impact Report prepared by Ernst & Young LLP for The De Beers Group of Companies and released by De Beers, the socio-economic benefits accruing to the indigenous communities of the region, the Northwest Territory of Canada and the national Canadian economy in general are clearly outlined. Some of these benefits are :-

1) Contribution of C$440 million to the NWT economy between 2006 and 2015, and a further C$350 million to the rest of Canada during the development phase.
2) A further C$5.3 billion in Gross Value Added (GVA) to the NWT expected to come after commercial production begins.
3) Providing employment opportunities to the local communities. Direct employment in Gahcho Kué’s activities in 2015, was 180 FTEs (Full-Time Equivalents) with a further 1,870 FTEs supported indirectly. The induced employment impact was 660 FTEs.
4) Revenue generation for the Government, contributing C$20 million in payments to the Government as employee income taxes, during the development phase alone.
5) Support to local aboriginal First Nations through Impact Benefit Agreements (IBAs) contributing C$4 million.
6) Careful management of diamond mining activities to ensure that they cause minimum disturbance to the environment and that the communities share in the benefits of the economic impacts they bring. Signing of an environmental agreement between De Beers and the local aboriginal communities in the NWT, known as “Ní Hadi Xa” (Watching the Land) to minimize the adverse impacts on the environment by the exploitation of the mine, and the establishment of the “Ní Hadi Xa Governance Committee” in which one representative from each aboriginal community is included together with a representative of the mine.