“Come September Come Facets” is the popular slogan associated with Sri Lanka’s only International Gem & Jewelry show, eagerly awaited by all stakeholders in the international gem and jewelry trade and industry, in the month of September every year. This year the 21st-version of this popular event in the international calendar of gem and jewelry shows, organized by the Sri Lanka Gem & Jewellery Association (SLGJA) and sponsored by the National Gem & Jewelry Authority (NGJA) of Sri Lanka and the Sri Lanka Export Development Board (SLEDB), is due to be held from September 8 to 11, 2011, at the Sirimavo Bandaranaike Memorial Exhibition and Convention Center, part of the complex of buildings associated with the Bandaranaike Memorial International Conference Hall (BMICH), situated along Bauddhaloka Mawatha (Bullers Road), Colombo. 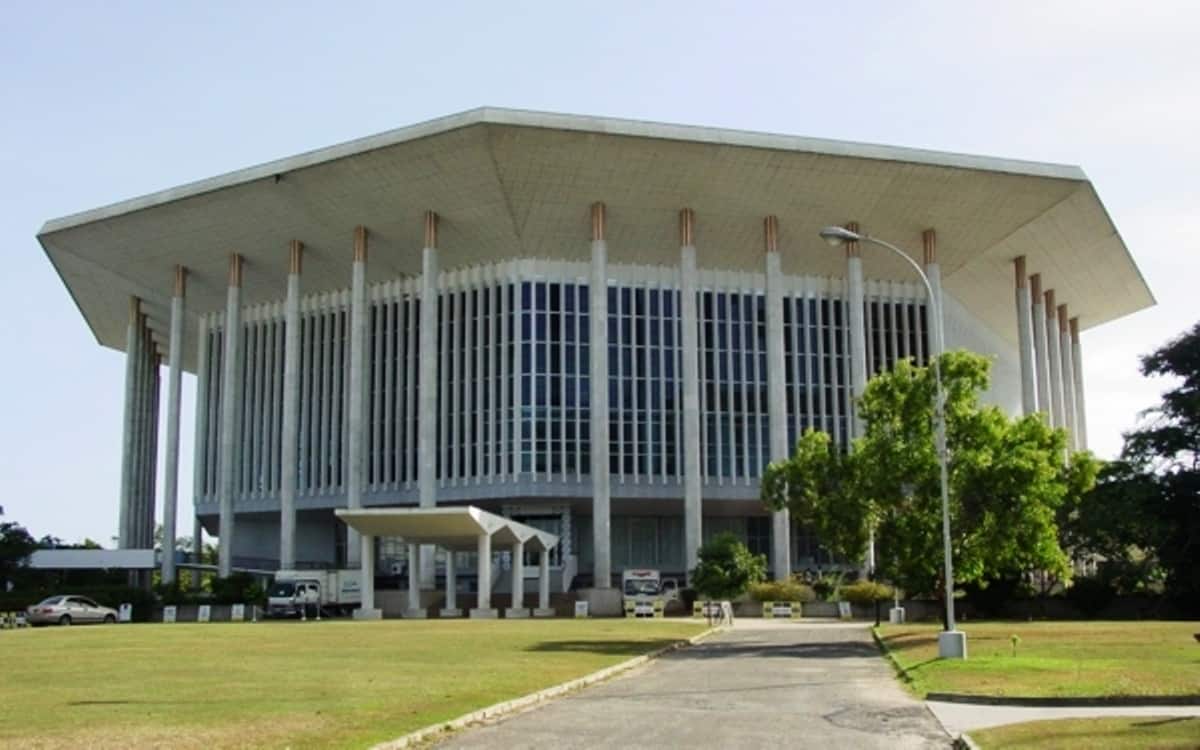 All is now set for the grand opening ceremony of the show at 9.00 a.m. on September 8, 2011. The show will be open to visitors from 9.30 a.m. to 6.00 p.m. on September 8, and on the remaining three days, September 9 to 11, from 10.00 a.m. to 6.00 p.m. Even though FACETS is not a mega exhibition compared to other international shows such as the Tucson show or the Hong Kong International Gem & Jewellery Show, it has in its own way, served to attract the attention of the international who’s who in the competitive field of the global gem and jewelry industry and trade, and helped to project the image of Sri Lanka as a major international player in the industry, being one of the main source countries for fine gems, and thus restore the past glory of the country as the “Land of Rubies, Sapphires and Pearls.”
The show will be held in the two large octagonal-shaped convention halls of the exhibition center, the main hall consisting of 99 booths being reserved for the display of precious and semi-precious gems and the second hall consisting of 55 booths allocated to jewelry, lapidary and other machinery used in the industry. Thus, the organizers of the show have set a modest target of around 150 exhibitors for this year’s show, expecting a turnout of around 7,500 visitors, out of which 1,000 are expected to be foreign visitors with 20 foreign exhibitors taking part.

Going by the response to the show so far, FACETS – 2011, has the promise of becoming a resounding success, exceeding the modest expectations of the organizers. Thirteen exhibitors from India, Myanmar, Thailand and Hong Kong, all major players in the international gem and jewelry industry have already registered for the show. According to the secretary of the SLGJA, Ziqufi Ismail , on-line registrations this year have surpassed the figures for the previous year, clearly demonstrating the enthusiasm generated this year. He said, “high profile international buyers have confirmed their participation in this year’s show. Two Chinese delegations have confirmed their participation in the event, with 19 members in both delegations. A Russian delegation with 16 members has also confirmed their participation. Out of the 154 exhibition booths over 90% has been sold out one month prior to the event, which shows the keen interest shown by the exhibitors.” He further stated that FACETS 2011 is an ideal public-private partnership project, with Sri Lankan diplomats around the world assisting in its promotion and the Export Development Board facilitating trade delegations for the show. With the economic boom and the conducive environment in the country there is a huge response for this year’s show, he said.

Brightly lit stalls in the jewelry section of FACETS - 2010

With the country’s main markets, the United States and Europe still recovering from the economic recession, organizers of FACETS expect a very strong showing by buyers from the emerging markets of China, India, Russia and Brazil, whose performance in the 28th Hong Kong International Jewelry Show, held between March 4-8, 2011, overshadowed the performance of the United States and Europe. The global jewelry market is on the upswing driven mainly by the demand in China, where last year jewelry sales totaled US $30 billion. The National Gem & Jewellery Authority of Sri Lanka has been actively promoting the popularization of Sri Lanka’s fine-quality gems and gem-studded jewelry in China, which is rapidly emerging as the World’s biggest consuming nation of jewels and jewelry.

An amethyst geode on display at FACETS - 2010

The National Gem & Jewellery Authority of Sri Lanka has set a modest target of US $1 billion through gem and jewelry exports by the year 2016, from its targeted earnings of around US $450 million (Rs. 50 billion) for the current year 2011. SLGJA’s Vice Chairman – Gem Segment, A.H.M. Imtizam believes that FACETS 2011 will help the industry to display its vast range of product offerings for the buyers and create more opportunities to reach the set target in 2016. He further stated that gem and jewelry exports are picking up and that there is a high demand from buyers, but industrialists are finding it difficult to meet the demand due to the shortage of raw materials. “The demand for blue sapphires increased with the royal wedding. The boom in tourist arrivals to the country will also improve indirectly the gem and jewelry exports,” he added.

A Citrine Geode from Minas Gerais Brazil, one of the exhibits at FACETS - 2010

SLGJA’s Vice Chairman – Jewelry Segment, A.P. Jeyarajah says, “The jewelry industry can acquire new technologies, innovative products, creative designs, packing materials, and analyze customer needs through this show. Sri Lanka is still in its early days as a jewelry exporter. Therefore FACETS would help showcase the country’s supply capabilities.”
SLGJA’s Vice Chairman – Lapidary Segment, Saman Amarasena, said that lapidary industrialists will have the chance to directly contact buyers and also have the opportunity to be updated on the latest developments in the industry with FACETS 2011. According to him this will benefit existing industrialists as well as potential industrialists who expect to venture into this segment.

FACETS Sri Lanka Chairman, Chanaka Ellawala says, “As an emerging economy, Sri Lanka is looking forward to expanding its trade ties with the South Asian region, particularly with India, Pakistan and Bangladesh, for which the exhibition would prove to be the ideal platform. FACETS provide the stakeholders of the gem and jewelry industry in neighboring countries to view and buy the country’s products, and is a huge opportunity to develop trade with Sri Lanka’s neighbors.” He further stated that business delegations from different parts of the world will be arriving for the show and we will discuss with these delegations, on ways and means of facilitating access to raw materials in sourcing countries for our industrialists. Apart from this, he said that talks will also focus on matters such as tariff and non-tariff barriers, product standards in export markets, and easy access for our products to those markets. Mr. Chanaka Ellawala also stated, that in the long run, tourism and the local retail business will also benefit indirectly by holding of the FACETS annually, as hundreds of foreigners come to Sri Lanka in September, especially for the FACETS and concerted efforts are made every year to increase foreign participation in the show.

Chairman SLGJA, Macky Hashim said, “FACETS has been organized in line with other international exhibitions in the region, which will facilitate participation from around the world. The exhibition will provide ample opportunities to the local trading community to expose their products to international markets. The SLGJA is now trying to promote the show in BRIC countries (Brazil, Russia, India and China) as well. Since its commencement in 1991, FACETS has made a significant contribution to the development of the local gem and jewelry industry, by putting Sri Lanka on the international trade map as a main producing and sourcing country, and the exhibition has also been instrumental in opening up new markets such as China and Russia for Sri Lanka.”

The SLGJA has also organized the “Best Gem-Cutter Competition” and “Best Design Gem-Cutter Competition” to coincide with the annual event. All competitors will be given the opportunity to display their products at the show, and secure orders from buyers. Apart from this a series of jewelry fashion shows, combining fashion with fine jewelry, will be held daily during the entire duration of the fair, adding glamour and excitement to the show.

It is hoped that as FACETS grows in strength from year to year, additional features will also be incorporated into the show, such as naming of a theme country or partner country for the show; organization of group pavilions for different countries; attempts to get renowned international trade organizations, such as Antwerp World Diamond Center, the International Colored Gemstone Association, the Platinum Guild International, the Gemological Institute of America (GIA) etc. to participate in the show; holding of a program of seminars and symposia on current trends in the industry, in parallel with the show; organization of international and regional jewelry design competitions and jewelry auctions to coincide with the show and organization of zone highlights at the show, such as Hall of Nature, Hall of Antique and Vintage Jewelry etc. Additional buildings in the Bandaranaike Memorial International Hall complex can be used for expanding the show, and the main hall itself could be used for the holding of seminars and symposia.