The open-pit Victor diamond mine, situated in the James Bay Lowlands of northern Ontario, approximately 90 km west of the coastal community of Attawapiskat First Nation, is one of 18 kimberlite pipes discovered in the 1987/88 period, high in the Canadian Arctic, 16 of which were found to be diamondiferous. After the signing of an Impact Benefit Agreement (IBA) with Attawapiskat First Nation community, construction of the mine began in 2005, and was commissioned two years later in 2007, with production diamonds delivered by the end of the year. The mine however, was officially opened in July 2008, six months ahead of schedule. In 2007, a second IBA was signed with Moose Cree First Nation, and two years later, in 2009, two more IBAs were signed with Fort Albany First Nation and Kaschewan First Nation.
Victor diamond mine is the first diamond mine for the province of Ontario and De Beers second Canadian mine. The mine site area which is arond 15 hectares has a projected life span of around 10+ years, expected to end in 2018. The annual processing capacity of the mine is around 2.7 milion metric tonnes, and the average annual production around 600,000 carats of rough diamonds. Diamonds produced at the Victor mines are renowned for their very high quality, with good color (top-color/D-F) and clarity grades and natural shapes, and rank with the highest quality diamonds produced elsewhere in the world. 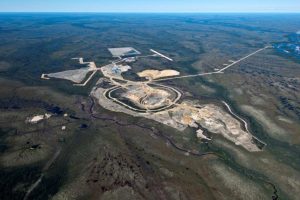 Aerial View of Victor Diamond Mine

The forecast lifespan of Victor mine ends in 2018. In an effort to extend the lifespan of the mine, De Beers has identified diamond-bearing kimberlites adjacent to the current operations area of the mine, which if explored has the potential to extend the mine’s forecast life beyond 2018. It is in this connection that the company has drawn up plans to expand the Victor diamond mine in consultation with the neighbouring communities, enabling the company to open the so-called “Tango Extension” in 2018, reported CBC News.
The company spokesman Tom Ormsby said that while it is still early, there have been preliminary discussions with the Cree community about the project. Ormsby believes De Beers and the Attawapiskat First Nation have moved past tensions related to last year’s roadblocks of the existing Victor mine. He further told CBC that if the company decided to move forward with the expansion, there could be a re-negotiating of the impact benefit agreement with the affected communities.

“We’re not there yet. We hope to make this go, but there’s still some hurdles we need to accomplish to get various approvals and the final data to say ‘Yes, this is going to be economic’,” Ormsby said.

If all goes well, he said, mining at the Tango site near Attawapiskat would begin in 2018.