In a press release dated March 5, 2015, Sotheby’s auction house announced the appointment of its Chairman of Jewelry, Europe and the Middle East, veteran auctioneer David Bennett to the newly created position of Worldwide Chairman of Sotheby’s International Jewellery Division. The announcement was made by Daryl Wickstrom, International Managing Director of Sotheby’s Jewellery & Watch Divisions. Backed by almost 40 years of dedicated service to the company, and leading Sotheby’s jewelry sales in Europe to greater levels, David Bennett’s new global role will involve the designing and implementation of a strategy for the continued worldwide expansion and development of the jewelry branch of the auction house. 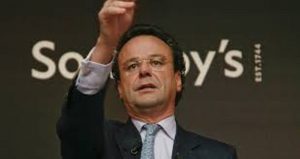 Commenting on David Bennett’s new appointment, the International Managing Director of Sotheby’s Jewellery & Watch Divisions, Daryl Wickstrom said, “David Bennett has led Sotheby’s jewellery sales in Europe to an incredible list of historic results over the course of his four decades with the Company. He is celebrated and respected throughout this field for his impressive scholarship, extensive knowledge of jewellery and precious stones, and consummate skills as an auctioneer. Sotheby’s global sales of jewellery are experiencing some of the fastest growth among the many collecting categories we offer, and in this new global role David will help design and implement a strategy for the continued expansion and development of this critical arm of our business. With the support of a network of jewellery experts that is unparalleled in the auction market, led by Lisa Hubbard, Chairman North & South America, Sotheby’s Jewellery, Quek Chin Yeow, Chairman Asia, Sotheby’s Jewellery, and Patti Wong, Chairman of Sotheby’s Diamonds, the Company stands in a unique position to serve our rapidly-expanding client base.”

Commenting on his appointment to the newly created position of Worldwide Chairman of Sotheby’s International Jewellery Division, David Bennet said, “Sotheby’s jewellery sales are in an excellent position to experience continued growth beyond our recent record results, which culminated in 2014 with our highest-ever annual total of more than $600 million in sales. Our client base is constantly expanding – buyers from more than 74 countries participated in our auctions last year in New York, Geneva, Hong Kong and London, with a quarter of all bidders participating in a Sotheby’s auction for their first time. I look forward to working with Lisa, Chin Yeow, Patti, and our international senior specialist team to continue building an exciting, diverse and innovative jewellery business that serves both new and established collectors and influential members of the trade on a global basis.”

Internationally recognized as an authority in the field of precious stones and jewelry, with a best-selling reference book, “Understanding Jewellery” co-authored with Daniela Mascetti, to his credit, David Bennet was named among the top 10 most powerful people in the art world in December 2013 by the international magazine Art + Auction and in June 2014 was featured on the list of the top 50 “most influential persons in Switzerland” published by the Swiss financial and business magazine Bilan.

During his 40-year career as auctioneer for Sotheby’s, David Bennett was closely involved with the sale of several famous jewelry collections such as The Jewels of the Duchess of Windsor, the princely collections of Thurn und Taxis, the royal jewelry collection of Her Highness Begum Sultan Mohamed Shah Aga Khan and the jewelry collections of celebrities such as Ava Gardner, Elton John, Maria Callas, Gina Lollobrigida and most recently a jewelry collection of the Greek investment banker and art collector, Dimitri Mavrommatis. He had also presided over many record-breaking sales such as the sale of the 24.78 carat fancy intense pink diamond known as the Graff Pink diamond, that registered a price of US$46.2 million, the highest price ever paid for a gemstone or jewel. He is known to the press as the “100-carat Man,” a name earned by his involvement in the sale of seven 100+ carat diamonds, including “The Mouawad Splendour” in 1990, “The Star of the Season in 1995, the “Lady Dalal” in 2011, and the “Graff Vivid Yellow” in 2014. Each of these stones established record prices for their categories during the year of their sale. Most recently, in November 2014, he established new record prices for a ruby (the ‘Graff Ruby’), and for a Kashmir sapphire; both stones were part of the celebrated Dimitri Mavrommatis collection of jewels.
Apart from this, under his stewardship Sotheby’s Geneva had presented several jewels of supreme historical importance, such as the legendary Beau Sancy, once the property of Henry IV of France, which sold in May 2012 for US$9,699,618 and a magnificent emerald and diamond tiara formerly in the Collection of Princess Katharina Henckel von Donnersmarck, which fetched the record price of US$12.7 million in May 2011, a new landmark price for a piece of antique jewellery.

David Bennet graduated with honours from the university with a degree in Philosophy in 1973. He joined Sotheby’s in 1974, and despite his busy career that demanded most of his time and energy, he kept alive his passion for the study of Philosophy and the esoteric sciences such as astrology and hermetism, that enabled him to rediscover the connection, which existed in Europe until the Middle Ages, between jewels and precious stones on the one hand and Man’s inner journey on the other. He continues to lecture on a multitude of subjects related to aesthetics and philosophy, such as sacred geometry, and the symbolism of stones in relation to the spiritual development of Man. He also gives consultations in “hermetic” astrology. In 2000 he was the co-founder of “Telesis Academy” a “meeting place” for philosophical investigation, based in Switzerland.