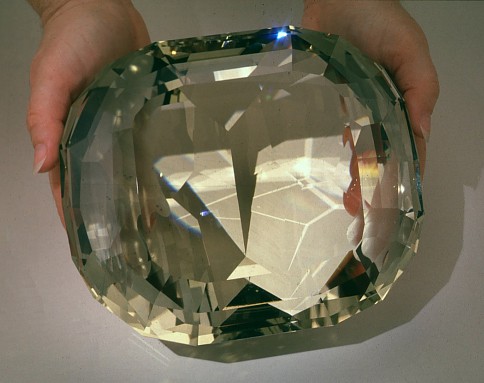 The “American Golden Topaz” which is of Brazilian origin, and resides in the Natural History Museum of the Smithsonian Institution, at Washington DC, is the largest faceted golden topaz and perhaps the largest faceted gemstone of anykind in the world. The name of the stone seem to reflect both the continent of origin of the enormous gemstone, and also the country where it resides at present, as well as the type of gemstone. The most commonly available topaz are light golden brown, yellow and colorless varieties.

One of the most renowned faceted gemstones in the world

The “American Golden Topaz” is an enormous cushion-cut gemstone weighing 4.5785 kg, equivalent to 4.5785 x 1000 x 5 = 22,892.5 carats. The rough stone that weighed 11.8 kg took a long period of almost two years to cut and polish. This is perfectly understandable given the enormous size of the gemstone and its hardness which is 8 on the Mohs scale. The finished gemstone had 172 facets, with a pleasant light golden brown color and almost flawless clarity and good transparency. The combination of perfect cut, color and clarity in addition to its enormous size has made the American Golden Topaz one of the most renowned faceted gemstones in the world.

Chemical composition and structure of topaz

Topaz is a Nesosilicate with the formula Al2SiO4(F,OH)2 bearing the name aluminum silicate fluoride hydroxide. Nesosilicates are the simplest of silicates in which the silicon-oxygen tetrahedral units (SiO4) exist separately. In Nesosilicates such as garnets, andalusite, olivine etc. the silicon-oxygen tetrahedra are held together by different metal cations. But, in topaz, these negatively charged tetrahedra causes cross links between chains of aluminum octahedra, formed by octahedrally co-ordinated aluminum cations linking together. The aluminum octahedra can be AlO4F2, AlO4F(OH), or AlO4(OH)2, where each aluminum atom is surrounded by four oxygen atoms lying in one plane at four vertices of the octahedron and the fluoride and hydroxide ions are situated above and below the aluminum atom at the remaining two vertices. The octahedral chains give topaz its crystalline shape. The strong bonds and close packing of atoms and ions in the Neosilicates also known as Orthosilicates, impart a higher density, refractive index and hardness in comparison to other sub-classes of silicates. Thus there are more gemstones among the Neosilicates than in any other silicate subclass. Topaz is also one of the few gem minerals, that under suitable conditions grow into enormous crystals. Some crystals can reach incredible sizes of up to several hundred kilograms.

Topaz can exist in a variety of colors such as colorless, pale blue, light green, yellow, yellowish brown, orange, pink and red. The commonest colors are colorless, yellow, and yellowish-brown and the rarest colors are pink and red. Topaz crystallizes in the orthorhombic crystal system and the crystal habit is long to short vertically striated prismatic crystals terminated by pyramidal faces. Please refer to the photograph of the Lindsay uncut topaz weighing 32 kg and the Freeman uncut topaz weighing 50 kg, both belonging to the Natural History Museum of the Smithsonian Institution, that display the above features. 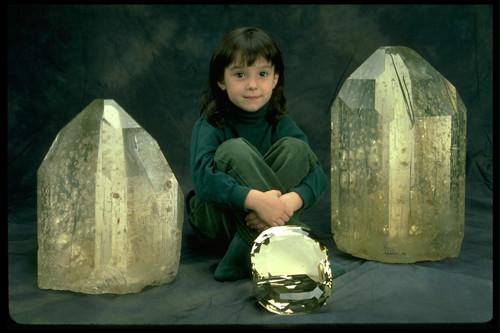 The luster of topaz is adamantine to vitreous, and the crystals are transparent to translucent. Cleavage is perfect and basal. The hardness of topaz is 8 on the Mohs scale and the specific gravity is 3.4 to 3.6. The refractive index ranges from 1.61 to 1.63. Dispersion is noticeable and Pleochroism is weak.

What causes color in topaz ?

Tpoaz which is aluminum flurosilicate is usually colorless in the absence of impurities. The common impurity found in topaz is iron, but iron does not impart any color directly to topaz as chromium impurities do in rubies, which impart the red color. In rubies the chromium atoms are excited directly by absorbing visible photons of light. The chromium atoms that jump to an excited state emit light in the red region of the visible spectrum when they return to their ground states. In the case of topaz the iron atoms create another unstable species in the crystal, and this new species jumps to an excited state by absorbing a visible photon of light, which emits light from different regions of the spectrum depending on their wave length, when they return to the ground state, giving rise to the variety of colors found in topaz, including the golden yellow or golden brown color of the “American Golden Topaz.” The unstable species created by the iron atoms are known as “Color Centers.”

Naturally colored topaz such as yellow, orange and brown topaz contain color centers that are stable to light. If a colorless topaz is irradiated by ultraviolet light, x-rays, gamma rays or high energy electrons, we can obtain a yellow, orange or brown color, but this color is usually unstable and fades in a few days in light. However blue topaz produced by irradiation produces color centers which are stable like the color centers of natural blue topaz, and therefore does not fade in light. These color centers can only be destroyed by heating, when the topaz becomes colorless again.

History of the American Golden Topaz

Minas Gerais, the source of the American Golden Topaz

The 11.8 kg (26 lb) enormous rough golden topaz crystal looked like a stream-rounded cobble, probably due to mechanical erosion as the stone was tossed around in fast flowing streams for a long period of time, and eventually became part of the placer deposits of the river or stream, where it was discovered in Minas Gerais, the fourth largest and the second most populous state situated in the southeast of Brazil. Some of the highest peaks in the country are situated in Minas Gerais, in the southern mountain ranges, and the state is also the source of some of the biggest rivers in Brazil. Minas Gerais is a mineral-rich state, and has large deposits of iron and sizeable deposits of gold and gemstones such as emeralds, topaz and aquamarine. Diamonds were also mined in the state in the past, the region known as Diamantina replacing the renowned Golconda Mines of Southern India, as the main source of diamonds in the world in the 18th to 19th centuries, but the deposits are now exhausted.

The name Minas Gerais given by the Portuguese colonialists literally means “General Mines,” a name given to the region after the discovery of gold in the state in 1693 and later gemstones and diamonds. The discovery of gold made Vila Rica the capital city of the state, the biggest city in Brazil, in the 18th century, and one of the biggest cities of America in population. However during the 19th century when the gold mines were exhausted, the city lost its importance and was renamed Ouro Petro, which remained the capital of the state until the beginning of the 20th century, when the capital city was shifted to Belo Horizonte. During the period of Portuguese colonial rule, mining in Minas Gerais, was tightly controlled by the colonialists who imposed heavy taxes on everything extracted. 20% of all gold production automatically went to the crown. Significant quantities of diamonds and other gemstones also entered the Portuguese Crown Jewel Collection during this period. After Brazil became a republic in the early 20th century, attempts were made for the attraction of foreign investors to explore the large deposits of topaz, aquamarines, tourmalines, kunzite, sapphires and other gemstones in the state. Today, Brazil continues to be one of the world’s largest gemstone producers and exporters, and the only source of imperial topaz and Paraiba tourmaline. The state of Minas Gerais produces about 80 % of Brazil’s precious and semi-precious gemstones and minerals.

The topaz belt of Minas Gerais

The topaz deposits in Minas Gerais is situated in a 290 sq. km. topaz belt running in an east-west direction west of Ouro Petro. Two large scale mechanized mines currently operating in the belt are the Capao Mines and the Vermelhao Mines. Capao, is an open pit mine located just outside Ouro Petro, about 5 km from the small village of Rodrigo Silva, situated almost at the center of the topaz belt. The mines consist of two large pits each carved over two hundred feet down into the hillside, and all operations are highly mechanized. After heavy machinery such as bulldozers and excavators are used to open the pits and dig out the mineral bearing soil, hydraulic sluices and seives are used to do all the sorting. Large volumes of water needed for this operation is drawn from a nearby lake. The final sorting of the gem-bearing gravel is done by hand. The second mechanized mine located at Vermelhao, is situated about 12 km east of the Capao Mines. There are also several manually operated small mines still employing the traditional techniques of manual digging and panning, such as the Don Bosco and Garimpo mines. 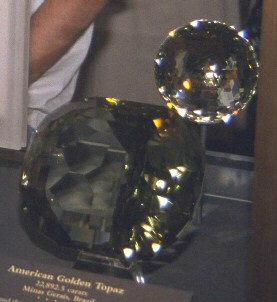 The 11.8 kg rough American Golden Topaz was purchased by the Rockhound Hobbyists of America, who got the stone cut and polished by Leon Agee. It took the master cutter a period of over two years to complete the process, given the enormous size of the gemstone, and the hardness of the stone being 8 on the Mohs scale. The finished stone was an extraordinarily beautiful product with a perfect cushion-cut having 172 facets, and a combination of good uniform color and clarity and a whopping 22,892.5 carats in weight, making it the largest faceted topaz in the world. The gemstone was donated to the National Museum of Natural History of the Smithsonian Institution, in Washington DC, in 1988, and is displayed in the Janet Annenberg Hooker Hall of Geology, Gems and Minerals, one of the main galleries in the Museum, together with the “Golden Topaz Sphere” weighing 12,555 carats. The Museum also holds two of the world’s largest uncut Topazes, the 32 kg Lindsay Topaz and the 50 kg Freeman Topaz