ALROSA, the world’s leading diamond mining company, accounting for more than 25% of global diamond production in terms of carats, has announced the recovery of a 76.07-carat octahedral rough diamond towards the end of February 2015, from its Yubileynaya (Jubilee) Diamond Mine, the world’s biggest diamond mine, situated in the Sakha (Yakutia) Republic of Russia, owned and operated by the Aikhal mining and processing division of the Company. The diamond was actually recovered at the Processing Plant No. 14, situated 8 km from the Yubileynaya kimberlite pipe, where the kimberlite produced at the Yubileynaya open-pit diamond mine are processed for the recovery of diamonds. Processing Plant No. 14 was brought into operation in July 1996 and since then there had been a rapid increase in the production of diamonds from the Jubilee Diamond mine. Today a major portion of diamond output of the Aikhal Mining Division comes from the largest open-pit mine of Yubileynaya (Jubilee) Diamond Mine. 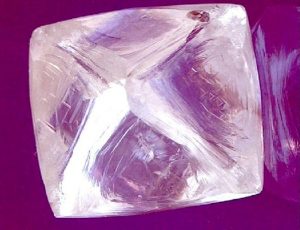 The Jubilee Diamond Mine has been in production since 1986. The Yubileynaya kimberlite pipe was estimated to contain more than 153 million carats (Mct) of recoverable diamonds, including 51Mct of probable underground reserves. The Jubilee diamond mine produced 10.4Mt of ore in 2012. The open pit mine is presently operating at a depth of 320m, but is expected to eventually reach 720m. 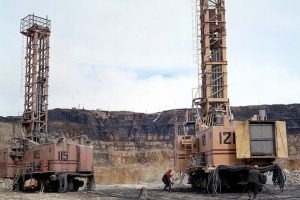 The diamond recovered at the mine is an Octahedral natural crystal, transparent with a yellowish-hue, with the interior of the diamond clearly visible. There are small inclusions of Olivine in the periphery of the diamond. The superficial part of the diamond contains a discal crack filled with graphite and sulphide.

ALROSA said its experts have estimated that the stone may be valued in excess of US$430,000. 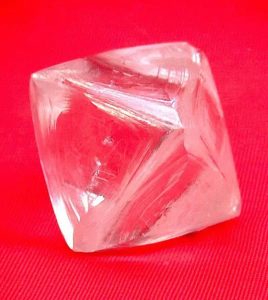 Another image of the 76.07-carat, Octahedral ALROSA rough diamond

ALROSA is the world’s leading diamond mining company, accounting for more than 25% of global diamond production in terms of carats. ALROSA is engaged in the exploration, mining, manufacture and sale of diamonds. ALROSA has operations in Republic of Sakha (Yakutia) and Arkhangelsk region in Russia and in South Africa.. The company operates 11 kimberlite pipes and 13 alluvial deposits. In 2014, ALROSA Group’s enterprises produced 36.2 million carats of rough diamonds, and in the same year ALROSA’s revenue from the sale of rough and polished diamonds exceeded US$5 billion level for the first time in the company’s history. ALROSA sells its own diamonds and has developed its own sales system based on long-term agreements with manufacturers of polished diamonds and jewelry. A core principle of their trade policy is to ensure all customers have equal access to rough diamonds. ALROSA has sales offices located in the world’s major diamond trading centers of Antwerp, Ramat Gan, Dubai, Hong Kong, New York, and London.